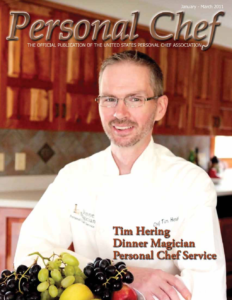 Chef Tim has been working in restaurants since he was 13 years old. Starting as a bus boy while trying to make enough money to attend camp that summer, he worked his way up through the ranks and was cooking and running kitchens within the first year and has not looked back.

He was born and raised in Cleveland, Ohio and in 1999, relocated to Pittsburgh, Pennsylvania to attend the Pennsylvania Culinary Institute. From working in family run, mom and pop operations, running fast food pizza shops, to preparing meals for some local Pittsburgh celebrities such as Mario Lemuix and Sydney Crosby of the Pittsburgh Penguins, as well as several of Pittsburgh’s local news anchors, Chef Tim has worked in some of the best restaurants Pittsburgh has to offer.

Sustaining a knee injury in 2006 and having to undergo surgery, he took a break from the kitchen to recuperate and after a stint at a sit down job at a telemarketing firm, he found himself in Southern Florida near the end of 2007 and working full time with his partner building Soap Alchemy… a Hand Crafted, Natural Soap Company. In 2008, they relocated back to Western PA and are enjoying modest success as Soap Alchemy has begun to appear in retail locations throughout the Eastern US, the US Virgin Islands and Bermuda.

Not able to stay out of the kitchen for too long, in the same year, Chef Tim attended the Culinary Business Academy in Atlanta, Georgia to learn as much as he could about the Personal Chef Industry and became a Professional Personal Chef, renewing his passion for cooking and for making people smile with a contented sigh and a belly full of healthful and delicious food, and took the leap from the restaurant kitchen, where he basically decided what to put on the menu, to your kitchen, where you get to decide what he puts on your menu and in your refrigerator! He also taught the Little Chefs Family Cooking Classes at the New Castle Community YMCA for several years.

Chef Tim became a Certified Personal Chef® in 2010 and has been a presenter at personal chef conferences. In 2011, he and his partner opened a Soap Alchemy retail location in the Beaver Valley Mall in Monaca, PA. About 3 years later, they moved the store to its current location in Beaver, PA. After devoting several years to running the shop full time, he took a step back in 2016 and in 2017 decided to take steps to finish a degree he began in the late 1980’s. He is currently attending Westminster College in New Wilmington, PA pursuing a Music Education degree as a trumpet player and is also pursuing a minor in Writing. He is a columnist for the Holcad, the Westminster student newspaper. He enjoys playing his guitar, rock climbing, camping, yoga, baking cookies, gardening, reading and spending time with his partner Jordan and their multitude of cats on their farm just North of Pittsburgh…